I had a pregnancy scare this week.

I know that sounds funny coming from a married mother of two and not, say, a teenager living with her parents but it would be dishonest to call it anything else. I thought I might be pregnant and I was terrified.

I have an IUD so it was highly unlikely that I could actually be pregnant. I knew this. But just as googling symptoms of the common cold can convince you that you have cancer, a quick google search into pregnancy symptoms could convince anyone that they were pregnant. And just go ahead and ask Siri if you can get pregnant when you have an IUD. She isn't necessarily reassuring.

What it basically came down to was that I was experiencing some very vague potential pregnancy symptoms. The kind of symptoms that make you very hopeful when you're trying to get pregnant and that you might not even notice when you're not trying to get pregnant...unless you happen to be an exhausted mom with anxiety who tends to jump to the most extreme conclusions about everything. My boobs were sore. I thought I was more tired than usual. I coughed and got this quick, sharp pain in my abdomen, which is the exact symptom that made me certain (and, it turned out, correctly so) that I was pregnant once before.

So, even though I knew, intellectually, how unlikely it was, part of me was afraid that I really might be pregnant.

Now, anyone who has spoken to me for more than 5 seconds knows that I am obsessed with being a mom. So, what was I so afraid of?

We can't have another baby. Not now. Not ever. Honestly, we are dealing with all that we can handle, both emotionally and financially. We are just starting to get decent sleep again. We are one month away from having a child in public school instead of private childcare, which is going to offer some much needed financial relief. We are officially done with diapers. I already struggle with feelings of guilt because I don't think Judah gets enough attention and, let's get real, Adeline was not built to be a middle child. The thought of having another child is completely overwhelming to me.

There was a time when we wanted four children.

I used to watch the show Parenthood, about four grown children and their parents, and think about how nice it would be, when we're older, to have a bunch of kids and kids-in-law and grandchildren coming to visit us. Jared is one of six kids and I have loved being a part of his huge, crazy family. I loved the idea of being Mom to a whole, big brood. I imagined three boys and a girl - the boys first and then a little princess.

Then Judah came along. And I found out that all of those things you hear about instant, all-consuming love are true. Being a Mommy has been every bit as incredible as I was always told it would be.

But, you guys, real talk: It is exhausting. It is terrifying.  It is easy to completely lose your sense of self in it all.

And so, when I thought I might be pregnant, I was absolutely terrified.

I put off taking a pregnancy test for about a week but I was being driven to distraction over it. So, after work on Friday, I ran into the Walmart around the corner from work and bought an at-home pregnancy test - the same ClearBlue Digital pregnancy test that I used so many times when I was so desperate to become pregnant with my babies. I felt just as hopeful as I did when I bought those dozens of other tests. I was just hoping for something different this time.

After dinner, I snuck upstairs and just took it, before I had a chance to talk myself out of it again. Those digital tests have a sort of countdown on them and I sat, watching it tick down, with the same knot in my stomach I had watching that test tick down so many times before.

While I waited, I made a deal with myself. I decided that, if it was positive, I was just going to skip right to the part where I was excited and loved this baby. Because what else can you do? There would be no point in getting upset. I'm a mom. I love my babies and I would love any additional babies we had just the same, planned or not.

It didn't occur to me to make a deal with myself about what I would do if it was negative.

I cried because I was so relieved. And, also, so strangely sad. I felt the same profound emptiness inside that I felt every time I was hoping and praying so intensely for a baby and saw that negative  pregnancy test.

It took a year and two rounds of Clomid for me to become pregnant with Judah. I suffered a heartbreaking miscarriage shortly before I became pregnant with Adeline. And I still ended up with two beautiful, happy, healthy children - a "rich man's family," they call it, although I had never heard that term until I started telling people that I was having a girl. It truly is an embarrassment of riches and I can't ask for more.

Having another baby is not what is best for our family. I know that.

For just a second, I let myself fall in love with the idea of that baby, just like I fell in love with Judah and Adeline before I was ever pregnant with them.

And so, even though I know it was for the best, that negative pregnancy test felt like a small loss.

Judah is going to be in 1st grade next year. Adeline is about to turn 3. The baby phase of our lives is over and I think I may feel that loss forever. I have loved every single stage of my babies' lives and I am looking forward to the ones still ahead. But I think, just like a piece of me will always mourn for the one that we lost, a tiny piece of me will always wonder about the baby that, for just one moment, felt like a real part of our future. 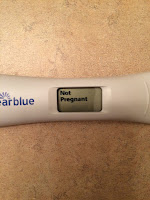 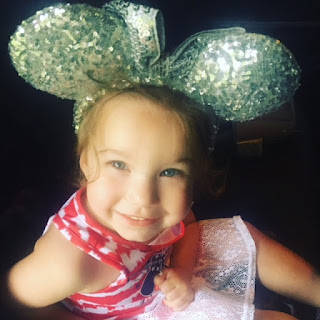